Born into a large family in the tiny village of Bonnay, France, Roland Mesnier discovered his vocation by accident on a summer day at the age of twelve. 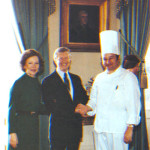 Chef Roland stands for a photo with President Jimmy Carter and First Lady Rosalyn Carter who hired Roland in 1979. 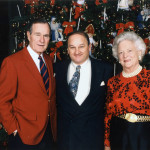 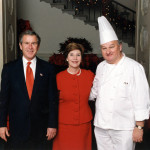 Posing with George and Laura Bush at Christmas. 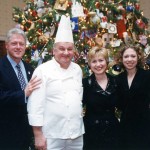 Roland and the Clinton Family at Christmas 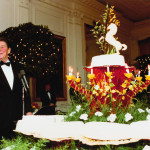 Ronald Regan celebrates his 70th birthday with a magnificent cake topped with a blown sugar horse, a replica of his favorite horse given to him by Mexican President, Jose Lopez Portillo. Guests of honor at the evening’s party included Elizabeth Taylor, Frank Sinatra, Cary Grant, Gregory Peck, Charlton Heston, Jimmy Stewart and many other close friends from Hollywood. 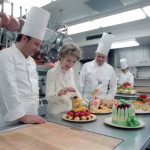 Roland consults with Nancy Reagan on an upcoming event. 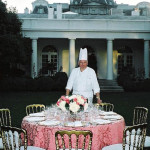 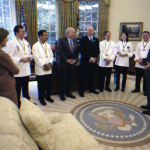 As Chairman of the U.S. World Pastry Cup Team, Roland presents the team in the Oval Office in the spring of 2002. Under Roland’s guidance, the U.S. won the first and only Gold ever received by an American team at La Coupe du Monde de la Patisserie (World Cup of Pastry). This competition is held every two years in Lyon, France and to this day, Roland still plays a part in training the U.S. team.

Apprenticing to his older brother Jean, Roland began working at the local patisserie in exchange for room and board. From there he was hired as the pastry sous chef at the iconic Savoy Hotel in London, then was hired as Executive Pastry Chef and spent nine years at the legendary Princess Bermuda resort where he met his wife, Martha and they had a son, George.  Roland and his family traveled back to France, this time Roland was hired as the Executive Pastry Chef at what is now the Four Seasons Hotel George V in Paris.  After a short time in Paris, Roland missed the beaches of Bermuda and returned as Corporate Pastry Chef for all of the Princess properties.  Then in April 1976, Roland came to the U.S.as Executive Pastry Chef at The Homestead, a venerable resort hotel in Hot Springs, Virginia.

Hired in 1979 by first lady Rosalyn Carter, Roland Mesnier began his career as White House Executive Pastry Chef and went on to become the longest tenured chef ever to serve there. Never content to sit still, on Roland’s days off from the White House he developed and taught the first professional Pastry Arts Program at L’Academie de Cuisine in Bethesda, MD – currently ranked in the top 10 Culinary schools in the U.S.

Chef Mesnier has won 18 gold medals, 4 silver and 3 bronze for his pastry creations in competitions around the world. He is a member of the Academie Culinaire de France and the recipient of many awards and accolades which include: the French Legion of Honor in 2005 – the highest honor bestowed on a French citizen; that same year he was inducted into the Chocolate and Pastry Hall of Fame in New York. He was awarded a Doctorate of Culinary Arts from the prestigious Johnson & Wales University in South Carolina. He is the author of three books, Dessert University, Basic to Beautiful Cakes and All the Presidents Pastries: Twenty Five Years at the White House, A Memoir.

He is currently at work on a fourth book, this one in conjunction with the White House Historical Association, scheduled for release in late 2010. While Chef Mesnier retired from the White House in 2004, he returned several times over the next two years to work on special projects for the Bush family.  Since 2006 he has traveled the U.S. and around the world giving speeches, judging pastry competitions and participating in fundraising events and book signings and much more.

From my beginning as a young baker’s apprentice in France to the grandeur of London; from the shores of Bermuda to the steps of the White House, I have had the privilege of serving my sweet creations to hundreds of thousands of guests from around the world. Read More…

Roland could work his magic